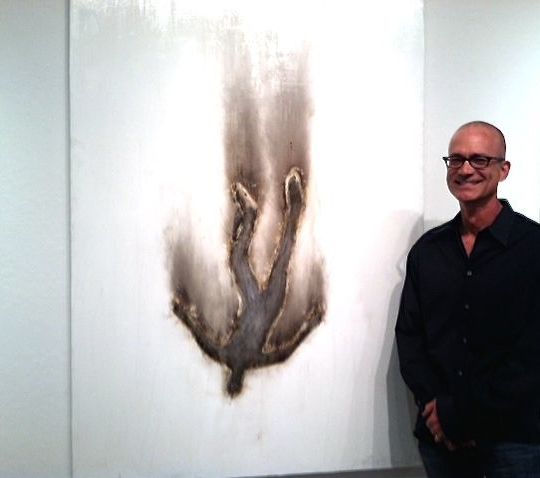 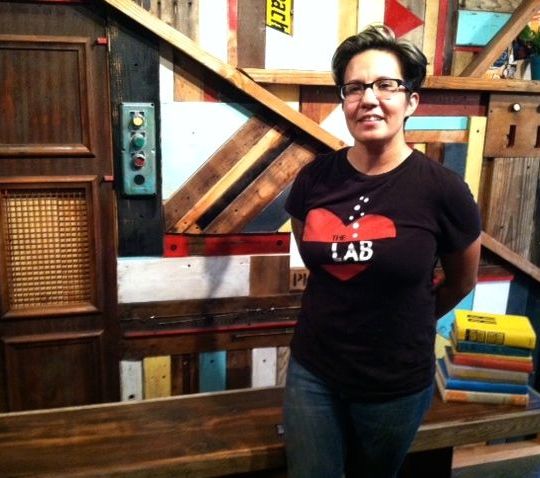 Monica Robles with her wall art made from salvaged materials. 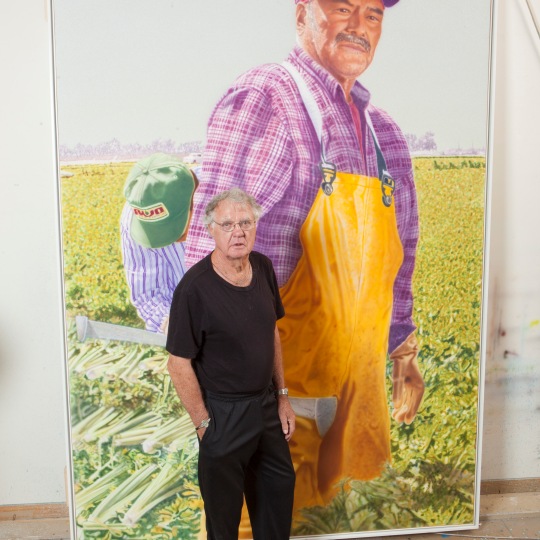 Don Coen with his 9-foot-high acrylic on canvas “Angel” from “The Migrant Series” at the Phoenix Art Museum. Image courtesy of the artist. 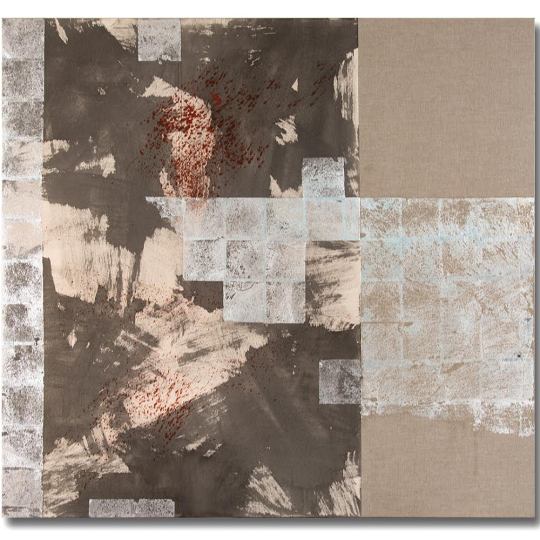 Two long out-of-town trips this fall have left me woefully behind on Phoenix art scene happenings. But last week I chose my art excursions well, if not somewhat randomly. And I realize I could have made any number of stops at our galleries and museums and felt rewarded — that’s how strong the Valley is right now.

My first stop was Bentley Gallery for a review of the Judith Kruger show for Visual Art Source. Although Bentley, which is south of Chase Field on Grant Street, is not open for First Fridays, it makes a wonderful daytime excursion, with its expansive viewing areas within an old brick warehouse. Bentley always shows art of the highest caliber by nationally and internationally known artists, and Kruger is no exception. The New York-based painter works in the Nihonga tradition of gathering together precious minerals, delicate Japanese papers and special inks, then working the materials into intricately layered abstract paintings on linen that dazzle the eye with things like gold leaf, crushed malachite and drips and swirls of earthy colors. Despite the opulence of Kruger’s materials, I found the paintings to be quite tranquil, with names like “Rain Karma” and “Silver Lining Meditation.” The show is up until October 31, 2014.

Next on the agenda was the Phoenix Art Museum for a media preview of “Don Coen: The Migrant Series,” which consists of 15 large-scale airbrushed paintings depicting migrant workers, reverently capturing them in the arduous tasks of harvesting and sorting produce. Coen, who grew up on a Colorado farm and has gone on to a long career in abstract and photo-realist painting, spent a decade visiting farms across the United States, starting conversations with workers and taking photos from which he would compose his immaculately detailed works. Cord Coen, one of the artist’s sons, told me that his father made a tremendous emotional investment in the project — hoping to put a human face on the “invisible community” of workers who help ensure that a beautiful bounty of produce reaches our supermarkets. Each piece is titled according to the first name of the migrant worker, and in many cases these men and women offer a direct and assertive gaze toward the viewer, exuding a pride in their work. I especially liked “Miguel,” who is shown hoisting cellophane-wrapped flower stalks over his shoulder, with the wall text explaining how Coen saw the flowers metaphorically “exploding” out of Miguel’s hands. Photos that you might see of the exhibition will not do it justice; go see it sometime between now and February 1, 2015.

By the way, did you know the art museum will have seven shows running at once by the end of the year? Consider an afternoon outing with out-of-town company once the holidays start rolling around.

My third art excursion was our recent Third Friday, during which I hopped from Grand Avenue to McDowell Road, artfully skirting the crowds on Roosevelt Row (catch ya next time, RoRo!). Despite all my First and Third Friday wanderings over the past couple of years, I had not made it to The Lab Pop-Up Gallery on Grand Avenue, which also serves as a clothing boutique. Actually, when the publicity blurb for The Lab mentioned Antonio Berni, I was hooked. Berni, a fabulous Argentinian artist who created large-scale urban portraits from found objects, was the subject of a summer exhibition at the Phoenix Art Museum. An awesome exhibition, to be sure, and Phoenix artist Monica Robles loved it too — enough to spin off her usual creation of small, found-object plaques and create an oversized, wall-length artwork, Berni-style. I loved the nooks for mementos and vintage books, as well as the clever use of multicolored pieces of salvaged wood and metal, jammed together as if it were parquet. The show has closed, but you can see more of Robles’ work at www.thelab137.com

Last but not least was a stop at the ever-impressive R. Pela Contemporary Art on McDowell Road and Third Avenue, where Robrt Pela is featuring the complementary artwork of Jerry Jacobson and John Tuomisto-Bell. To create his non-representational series of paintings called the “Sleepwalk Drawings,” Jacobson collected numerous metal bristles that had fallen from street-cleaning trucks (talk about repurposing!), then wet them with watercolors and ink as he randomly laid them on paper, and waited for the resulting rust to form the composition.

Rust also plays into the sculpture and mixed-media canvases by Tuomisto-Bell. You can see it in his “Falling Man” sculptures,with their ocher and burnt red patinas, intriguingly on the heads of his figures. (Tuomisto-Bell, in addition to his own studio work, does bronze casting for other artists at his internationally known foundry in Phoenix.) But I was especially drawn to the artist’s “Falling Man” series of canvases, in which he dared to use gunpowder to create a smoky, surreal effect as a way of suggesting shadows and movement. “The kid in me likes to play with fire,” he told me jovially. There’s a definite Icarus and falling from grace analogy in the work, but Tuomisto-Bell says he’s not surprised when viewers relate the canvases to September 11, 2001, and that day’s iconic photograph of a falling man.

2 thoughts on “Random acts of art-hopping”

It’s gonna take a lot of work to unify our country. Learn about one Arizona artist’s efforts to foster civility, compassion and courage through a massive participatory textile art project. See the article on my website Explore Art: Denver. #thevioletprotest #annmorton #textileart #publicengagementart #socialpracticeart #peacefulprotest
Amid all the math-based hard-edge geometric abstractions in “Clark Richert in hyperspace” @mca_denver it was a treat to come across this work by Karen McClanahan from Clarkdale AZ in the complementary show “The Nth Dimension.” McClanahan veers from straight lines to suggest landscapes, and this double canvas “Mug Shot (blue #001) brought me right back to Arizona. #karenmcclanahan #clarkrichert #geometricabstraction #mcadenver #arizonalandscapes
The Suhas Bhujbal show “Summer” struck me as quite resonant as the season winds down, especially this oil on canvas “Market No. 11,” with its interplay of light and shadow as it captures a crowded scene. A worthwhile stop along Laguna Beach’s gallery row. #suhasbhujbal #suegreenwoodfineart #summersend #lagunabeach #exploringorangecountyart
“Yearning to Breathe Free” by Nery Gabriel Lemus is a succinct but powerful installation that juxtaposes the famous Emma Lazarus / Statue of Liberty sonnet with the struggles of today’s immigrants and the accompanying charged dialogue. @nerygabriellemus uses watercolor portraits, sculptures and rugs to tell highly humanistic stories. Continuing thru Sept. 16. #nerygabriellemus #grandcentralartcenter #yearningtobreathefree #immigration #exploringorangecountyart
Recognize the famous piece of public art behind me? It’s “Big Sweep” (2006) by Coosje van Bruggen and Claes Oldenburg right outside @denverartmuseum. C’mon over to @deborahross5280 to follow my explorations of the art scene in the Mile High City and beyond. #bigsweep #oldenburg #publicart #denverartmuseum #denverartscene
Couldn’t resist the timing: Happened to see a small pop-up show called “Heroes and Villains.” And the season finale of “The Handmaid’s Tale” is tonight. Kaitlin Zeismer created these acrylic gouaches on paper, “Blessed Be the Fruit” and “F*** This.” Dystopia meets folk tale. #handmaidstaleseason2 #heroesandvillians #graphicart #denverartists #cooperanddash
Loading Comments...
Comment
×
%d bloggers like this: