Although I can’t exactly say that I did justice to our city’s annual Art Detour — a weekend-long central Phoenix art walk, kicked up a notch — I can say that my handful of “detours” into galleries were quite worthwhile.

Unfortunately, I had to miss out on a ton of artful antics and diversions, including the annual burning of the phoenix, miniature golfing at the Icehouse, the Public (Art) Hanging on Grand Avenue, outposts of live music, and a walking tour of downtown public art. Sounds like fun stuff. But I do take pleasure in knowing that Art Detour, timed with our wonderful spring weather, held its own against all the other weekend goings-on about town, attracting Phoenix residents and visitors of all ages. A tour guide on the shuttle bus said that Friday evening alone brought in about 20,000 folks.

For the 25th anniversary of Art Detour, its organizers, Artlink Phoenix, pulled out all the stops, galvanizing more than 90 established galleries, pop-up galleries, restaurants, shops, bars and other venues into participating. That big map of destinations, with its multicolored dots, was a work of art in itself!

Probably my best stop was at MonOrchid, a sizable gallery that’s continuing its evolution toward showing seriously good art. Curator Justin Germain says he wants to steadily mount quality shows, and owner Wayne Rainey says he likes the direction that Roosevelt Row is taking as a hip place for artists and for those who like to live downtown.

For Art Detour, the gallery showcased a number of Arizona artists, including Sue Chenoweth, Lee Berger, Mary Shindell and Otto Rigan. What I found most interesting was the typed information accompanying several of the pieces, in which the artists described their ties to the Phoenix visual arts community and Art Detour in particular. Their mentions of former galleries like Eleven East Ashland and MARS Artspace took me down memory lane, for sure.

Next door to MonOrchid on Roosevelt Row is greenHAUS, combining unique boutique items along with affordable art. There was a continual flow of visitors while I was in the gallery, with everyone receiving a pleasant greeting from owner Dayna Reed. I met the cat, too!

Across the street is one of my favorite downtown galleries, Modified Arts 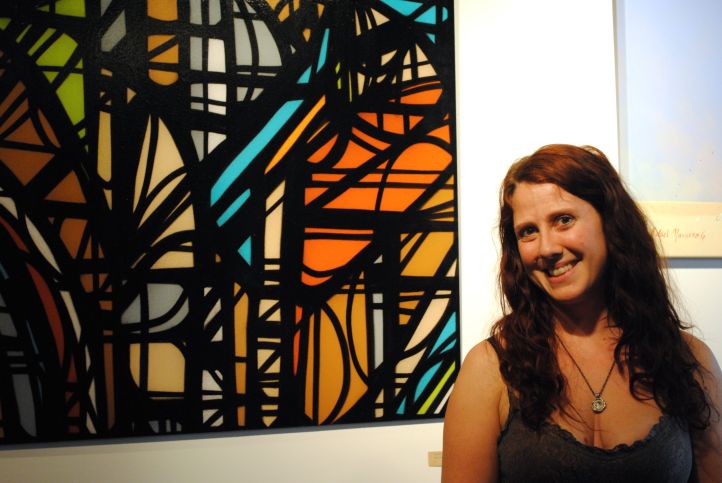 Dayna Reed of greenHAUS shows off a JB Snyder work.

Geoffrey Gersten with one of his paintings on view at Modified Arts. 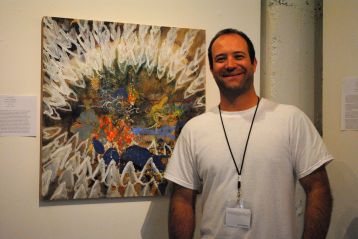 Justin Germain of monOrchid stands with a Sue Chenoweth piece.

This Otto Rigan piece made it to monOrchid especially for Art Detour.

This is a detail from the Fred Tieken painting “The Buzz.”

where Geoffrey Gersten, a Tempe-based artist, was answering questions about his surrealistic paintings. I was amazed by his prolific output and mesmerized by a number of finely rendered pieces. Things are not as benign as they appear in Gersten’s world of Hello Kitty, cupcakes, floral patterns  and picket fences. So yes, that really was a green Gumby-like character with its head on fire and — next painting — a stuffed bear on an army tank. Thanks for the nightmares!

Speaking of nightmares, I made a point of seeing “The Joe and Jan Show” at Robrt Pela’s pop-up gallery on West McDowell Road. The show was made up entirely of images in various media of our controversial sheriff, Joe Arpaio, and our controversial governor, Jan Brewer — a scary pair. Several artists participated, including Eric Cox with unforgettable paintings of Arpaio in a sombrero and Brewer done up as “the Wicked Witch of the Southwest.” I also enjoyed Todd Daniel Grossman’s knitted panel with a stitched black outline of Brewer’s face on the colors of the Mexican flag.

In explaining the premise for the show, Pela said that Arpaio and Brewer often justify their words and actions as a means of upholding our fundamental rights. The artworks, Pela said, are a simple expression of a fundamental right known as the First Amendment.

Nuna Dow was on hand at After Hours to answer questions about her mixed media works, utilizing thick stripes of paint and paper strips in cross-hatching and other geometric patterns. I liked the layered and abstract qualities of her work.

Admittedly, I should have allowed more time for Art Detour, but there is always year 26, right?

All of you who enjoyed this year’s Art Detour, chime in in the comments section, and tell me what I missed!