Editor’s note: This question-and-answer session was originally conducted for a spring 2012 article in Art + Culture North Texas magazine, out of Dallas. — DR

When she paints, Forrest Solis likes to split the canvas: two seemingly divergent ideas play off each other on either side of the composition. In her new series of 12 paintings at Galleri Urbane in Dallas, “Self and Sex: What a Young Woman Ought to Know,” Solis zeroes in on gender roles, particularly how we absorb conflicting do’s and don’ts from an early age.

Line drawings of chubby-cheeked children and hand-lettered rules of behavior form the left half of the compositions, where Solis borrows from post-Victorian storybooks. Those frames are juxtaposed against images of contemporary models with up-to-date clothing and hairstyles, serving as a rebuff against old-fashioned social mores.

Introspection and self-realization are frequent themes for Solis, an assistant art professor at Arizona State University who has exhibited nationally and internationally. She shared her ideas on changing gender roles from her studio in Phoenix.

Q: You like paradox and irony in your work — the idea that a benign image from long ago can have absurd messages for us today.

A: Yes, “Canning Fruit” is a good example. … The text submits that a woman’s value is based upon her ability to be a homemaker and in her ability to build up her man. The woman in the illustration is warmly smiling as she assumes this role. In the oil painting side on the right, the model is also making jam, but in this case she does not smile. She has a very vacant quality to her, almost as though her mind is elsewhere. Seeing a contemporary woman stirring a pot does not elicit the same ideas as it did in the early 20th century. We do not judge her value as a person based upon her actions in the kitchen, thank goodness.

Q: What would you say is the common thread running through your current work?

A: The “Self and Sex” series came about after I discovered a couple of heirloom books from my husband’s deceased grandmother’s estate. The books focus on life lessons geared toward young women and children. As a woman, a mother and teacher I was pretty horrified by the content and immediately knew I wanted to create a series of paintings integrating these texts. The paintings provoke conversation. There isn’t any one message. The content is complex. At times the ideas in the old texts seem absurd and outdated, but after some discussion we begin to see how relevant the content is. … It might not be a sexy subject, but being a modern woman balancing the expectations of society, work, husband and child is complicated and full of difficulty. This work is a way for me to address this in a fun, lighthearted way.

Q: Those following your work will notice that you have veered away from self-portraiture and have begun using models. What qualities do you look for in your models?

A: The “Self and Sex Series” has two parts: What a Young Woman Ought to Know and What a Young Man Ought to Know. This exhibition only includes the first. In terms of models I was looking for a female and male model who exemplify a sort of contemporary look. They are both youthful and somewhat androgynous. The female model in this series is rail thin with an almost boyish attractiveness.

Q: Why do you use both acrylic and oil paint on your canvases?

A: I chose to use acrylic for the illustration and text to represent the flat graphic quality of ink on paper, and I use oil to create the illusion of reality. The oil is a more sensual surface and works to further contrast the two sides.

Q: How would you describe yourself as an art professor? Do your ideas on gender roles spill into your lessons and possibly influence your students?

A: My interest in the figure and gender roles definitely affects my courses. At DePauw University I taught a course on the changing self-perception of women as seen through the history of self-portraiture. At Arizona State University I regularly teach figure painting and life drawing. Many of my students are young women dealing with the same identity issues I did at their age, and I definitely encourage their exploration of the subject through projects and suggested readings. 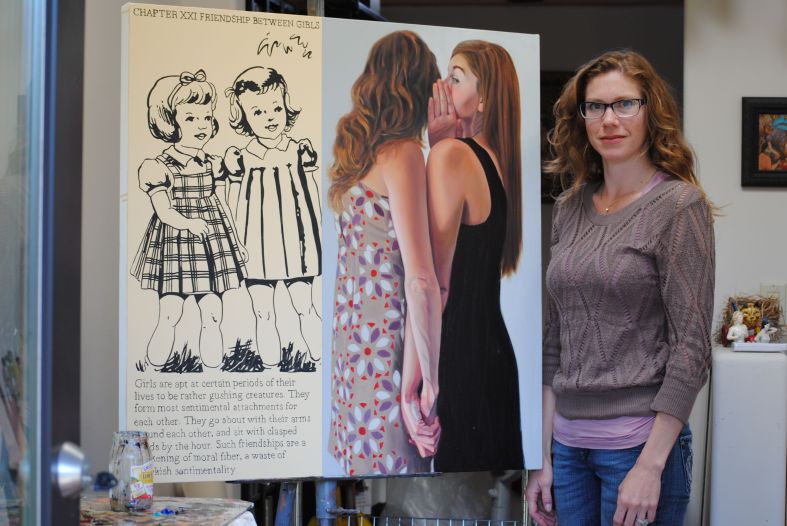 Forrest Solis in her studio with “Friendship Between Girls.” That’s Forrest with her sister in the painting. Photo by Deborah Ross. 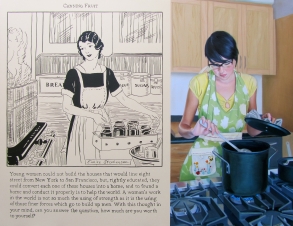 “Canning Fruit” by Forrest Solis. Photo courtesy of the artist. 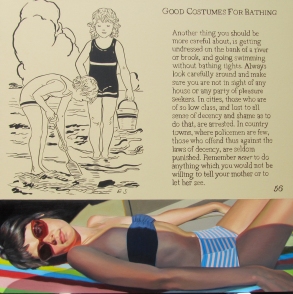 “Good Costumes for Bathing” by Forrest Solis. Image courtesy of the artist.